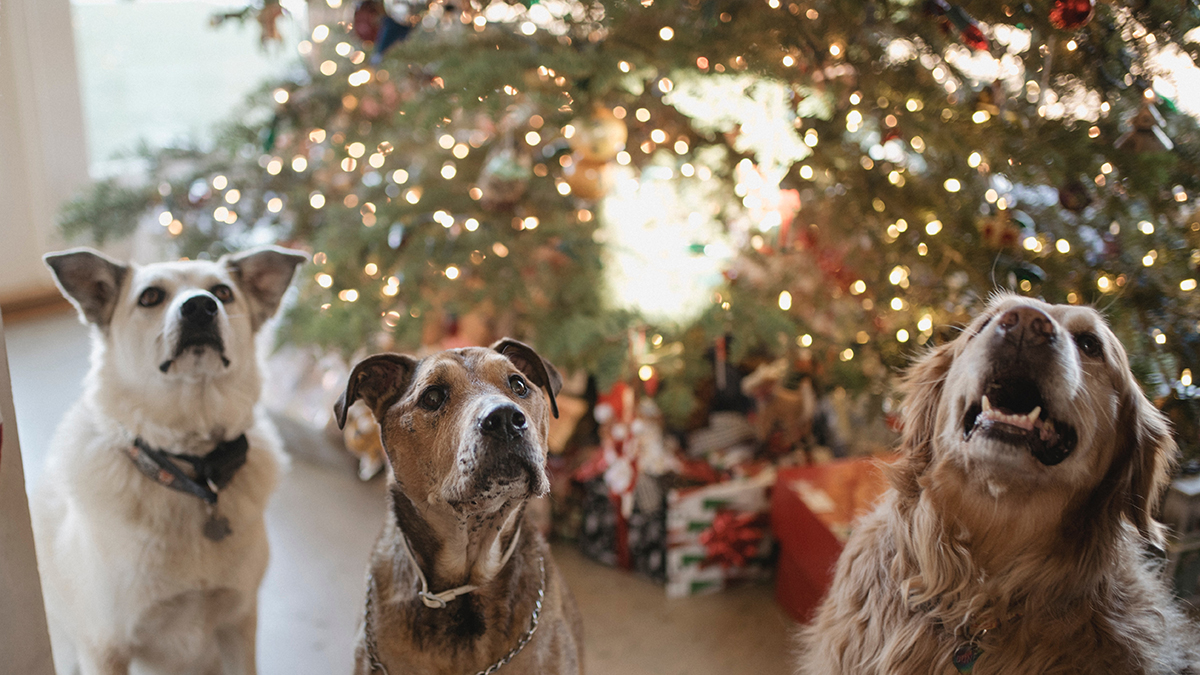 While the holidays add excitement to the long winter months, we cannot forget about indoor and outdoor toxins frequently seen during this time of year. Keeping your pets healthy and safe will help keep your holidays as stress-free as possible. If you believe your pet ingested any item of concern, it is important to call your veterinarian or ASPCA Animal Poison Control Center at (888) 426-4435 right away to have the risk of poisoning assessed.

Are Poinsettias As Poisonous To Pets As Many People Think?

While poinsettias may cause gastrointestinal upset such as vomiting and diarrhea, significant poisoning is not typically seen. Dogs and cats may have a lack of appetite or upset stomach for a brief period of time after eating the leaves of a poinsettia, but this often resolves without medical intervention. However, if your pet’s signs of illness persist for more than 24 hours, it is recommended that you contact your veterinarian.

Are There Other Holiday Plants That May Be Harmful To Pets?

Many holiday arrangements contain lilies (Lillium species), holly, mistletoe, or Yew plants. Bouquets brought into the house by holiday guests should be thoroughly inspected, as lilies are a common flower used by florists. Just one or two bites of a lily can cause acute kidney failure in cats – even the pollen and the water that the plant is in are poisonous.

Holly berries and mistletoe can also be concerning to pets. When Christmas or English holly is ingested, it can result in severe gastrointestinal upset, thanks to the spiny leaves and potentially toxic substances found in the plant. If ingested, most pets smack their lips, drool, and shake their head excessively due to irritation from the spiny leaves.

As for mistletoe, most of us hang it high enough that it is out of reach of our pets. Nevertheless, it can also be poisonous if ingested. Thankfully, American mistletoe is less poisonous than the European varieties. Mild signs of gastrointestinal irritation may be seen, although, if ingested in large amounts, collapse, hypotension (low blood pressure), ataxia (difficulty walking), seizures, and even death have been reported.

Japanese Yew has become a popular addition to holiday wreaths. All parts of this evergreen, except for the fleshy part of the red berries, contain toxins that target the heart. If your pet ingests any part of this plant, they can develop stomach upset, an abnormal heart rate, low blood pressure, and potentially even coma and death.

My Pet Loves To Play With Christmas Decorations. Is This Safe?

While it is hard to resist the temptation of sparkling lights and glittering tinsel, these items can be very hazardous to pets. If your pet ingests string-like tinsel, ribbon, or twine, it can become lodged in the intestinal tract and cause a linear foreign body to develop. Treating this condition requires costly, invasive surgery and, in severe cases, serious complications can arise. Some animals enjoy chewing on electrical cords from tree lights or biting the lights themselves. This can result in electrical burns to the mouth and tongue and other complications from electrocution. Old-fashioned bubble lights may contain poisonous chemicals such as methylene chloride, which can lead to irritation to the mouth and gastrointestinal tract, depression, and potentially aspiration pneumonia if your pet decides to chew on them.

Ornaments can also look very tempting to your pet. If a glass ornament breaks while your pet is playing with it, the glass shards can lead to lacerations to the skin and mouth as well as damage to their gastrointestinal tract. Homemade ornaments may pose a risk to your pets as well. Ornament dough is often high in salt, which may cause electrolyte abnormalities and seizures. Hang these decorations high on the tree or pets may think they are meant for them!

What Foods And Beverages Are Most Problematic To My Pet This Time Of Year?

With the holiday season comes a delightful variety of festive drinks, baked goods, chocolate confections and other rich, fattening foods. However, it is not wise, and in some cases, can be quite dangerous, to share these treats with your pets. Potential problems include:

Foods containing grapes, raisins, and currants (such as fruit cakes, breads, and cookies). These can result in kidney failure in dogs.
Alcohol. Most pet owners know not to give alcoholic drinks to their pets; however, alcohol can be found in other places such as rum soaked cake and in raw bread dough containing yeast. Ingestion of alcohol by your pet can cause signs including ataxia (difficulty walking), disorientation, changes in blood pressure, and abnormal blood sugar levels. In addition to the risks associated with alcohol ingestion, raw dough can expand in your pet’s stomach and can result in bloat, which may be life threatening.

Chocolate and cocoa contain theobromine, a chemical similar to caffeine. Ingestion in small amounts may cause vomiting and diarrhea, with cardiovascular and neurologic changes possible with large ingestions. The amount of theobromine present in chocolate depends on the type. White chocolate and milk chocolate contain the lowest amounts of theobromine, while unsweetened and baker’s chocolates contain high amounts of theobromine. The specific risk to your pet depends on the amount ingested, type of chocolate and size of your pet. Pancreatitis (inflammation of the pancreas) is a concern even in cases where poisoning is not expected.
Many sugar-free gums, candies, and baked goods contain xylitol, a natural sweetener which is toxic to dogs. Ingestion of xylitol may result in a life-threatening decrease in blood sugar as well as liver failure. Leftover fatty meat scraps can produce severe inflammation of the pancreas (pancreatitis), leading to abdominal pain, vomiting, and bloody diarrhea.

Is Ice Melt Safe To Use In The Same Area That Pets Are Around Outside?

Ice melt is commonly used around entryways and sidewalks. For convenience, containers that are filled with ice melt granules are often left within a pet’s reach. There are numerous formulations available and small exposures typically lead to stomach upset and possibly skin and paw pad irritation. Many of these products are salt (sodium) based. If ingested in large amounts, electrolyte abnormalities may occur which can result in seizures and brain damage. If your pet has consumed any amount of ice melt, it is important to call the ASPCA Animal Poison Control Center or your veterinarian immediately.

What Type Of Problems Can Occur If Pets Ingest Antifreeze?

While antifreeze (ethylene glycol) is around all year, exposure to this fatal chemical is more prevalent in the winter months. It is important to make sure your pet does not have access to this product. Antifreeze can be found in numerous sources including cars and RVs, and is also used to winterize plumbing. In many regions with cabins that are not used frequently during the winter, it is common for people to place antifreeze into their cabin’s bathroom plumbing to prevent it from freezing during the winter. Numerous calls are received each year at poison due to dogs running into cabins and drinking out of the toilet.

Finally, there are products that may contain small amounts of antifreeze in holiday decorations, such as imported snow globes. If a snow globe falls off the table, cracks open, and your pet then licks up the contents of the snow globe, there is the risk of poisoning if antifreeze is present. It does not take ingesting more than a few laps of ethylene glycol to potentially be fatal to cats and small dogs.

Signs of early poisoning include acting drunk or uncoordinated, excessive thirst, and lethargy. While signs may seem to improve after eight to twelve hours, internal damage is actually worsening. Crystals develop in the kidneys during this time, resulting in acute kidney failure. Immediate treatment with an antidote (fomepizole or ethanol) is vital. Because the antidote has the best chance of success if given within the first 3 hours for cats and 8-12 hours for dogs, it is imperative that you seek veterinary care immediately for blood testing to diagnose antifreeze poisoning. These tests include measuring ethylene glycol concentrations in the blood, monitoring the acidity of the blood, and examining the urine for crystals.