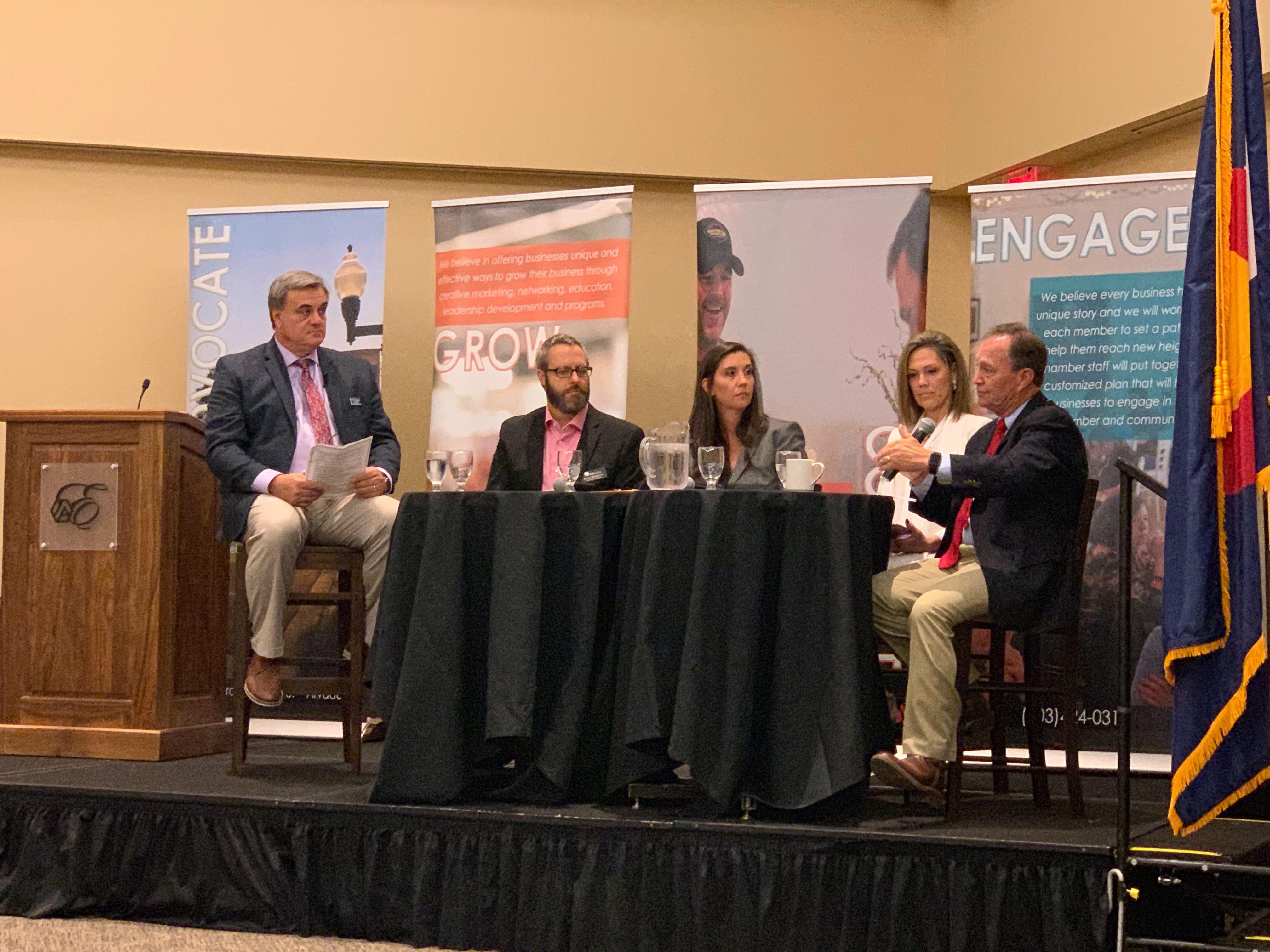 On August 16, the Arvada Chamber of Commerce hosted the Community Impact Breakfast, “Policy & Politics – A National View.” This robust conversation featured leaders in federal and local policy diving deep on a wide range of topics including marijuana banking, healthcare, immigration, aerospace and more.

Congressman Perlmutter led the conversation with an overview of state and national legislative topics. Overall the Colorado economy is very healthy; Perlmutter noted the unemployment rate falling a bit more, down to 3%. Colorado has maintained a sub-4% unemployment rate since June 2015. But he warned of taking this period for granted, with signs of real estate slowing. Perlmutter serves on the Financial Services Committee, where he is working on new affordable housing programs for disabled populations and students.

Perlmutter also cited new amendments that support federal jobs at the National Renewable Energy Lab in Golden and an amendment to continue the advisory committee to help the health of former Rocky Flats workers. In other science-related updates, Perlmutter highlighted NASA’s aim to have astronauts on Mars by 2033一good news for Colorado, which leads the nation in private aerospace jobs per capita.

After his introduction, Congressman Perlmutter was joined by the panel for a deeper dive into these topics and more. Below are our top 5 takeaways from the panel discussion.

1. Regulation and trade tariffs are two of the biggest federal issues impacting our local businesses.

Perlmutter said the biggest federal impact is regulation and taxes on small local businesses. Regulation is needed, he said, but it needs to respect businesses and people’s livelihoods. “If you’re in business, you need predictability,” said Perlmutter. But now, he said it’s hard for businesses to predict decisions at the federal level. Christie Lee also reiterated the importance of predictability, as Lockheed Martin relies on the Air Force and other federal buyers.

Tariffs and other trade concerns are also key federal issues that are just starting to affect local businesses, said John Marriot. Jerry Healey added that recent tariffs on newsprint in Canada were reversed, but the adjusted print prices supported by the industry remained high. “Sometimes prices don’t come back down,” said Healey.

When Colorado Amendment 64 was passed in 2012, cannabis was still illegal at the federal level and anything with THC was illegal for banking. However, not all areas consider cannabis illegal, with products like Delta 8 being sold and creating revenue for businesses. Any financial institution that knowingly possessed transactions for marijuana-related businesses committed the crime of money laundering and faced a minimum of 10 years in prison. This created a public safety crisis as large amounts of cash were stored and transported in our neighborhoods. Additionally, the lack of banking meant that considerable amounts of cash were not subjected to the scrutiny and controls inherent in our state and federal banking systems.

In 2013, Sundie Seefried and her team at Partner Credit Union designed a full-scope cannabis banking program that has withstood the scrutiny of eight federal and state exams. Safe Harbor Private Banking successfully removes $300 million in cash from the streets of Colorado communities and into bank accounts. Still, many cannabis companies can’t qualify for traditional bank loans or process credit card transactions. Although there are a number of institutions that offer cannabis entrepreneurs with CBD merchant accounts for CBD and hemp transactions, there are very few that offer comprehensive payment solutions for cannabis businesses across the board. For dispensaries, handling cash transactions remains the norm.

The next step will be the passing of the Secure and Fair Enforcement Banking Act, authored by Congressman Perlmutter. “Safe banking will provide certainty and legality,” said Seefried.

3. Apprenticeships are the future of workforce training programs.

According to Christie Lee, Lockheed Martin has 600 jobs available, many of which are technicians. She is seeing a culture shift where companies like Lockheed now struggle to find hands-on experience. In response, Lockheed developed the Advanced Manufacturing Technician Apprenticeship Program, a nine-week certification program to equip candidates with the skills necessary to build electronics hardware in space operations Next, the company is looking to expand training to software careers with community college partnerships.

“We all need to be life-long learners,” said Perlmutter, speaking to the role at the federal level of providing accessible college and workforce training to the state. “The future is apprenticeships.”

Developing a stable workforce for the future will require support from the federal level, as well as pressure from state programs and systems. John Marriot credited the efforts of the Arvada Chamber of Commerce to develop a workforce program that engages area schools and businesses. “As local businesses, we’re part of the solutions too,” said Marriot. “The effort rests on all of us.”

4. New developments in the aerospace industry are positive for Colorado job growth potential.

In 2019, Colorado ranks second in the nation in aerospace employment, just behind California. This includes about 8,000 employees at Lockheed Martin.

A number of recent developments have the Colorado aerospace industry hopeful for continued growth. Vice President Mike Pence announced that we’re aiming for a return to the moon by 2024. The Atermis 1 launch will occur in the next two years, which includes a 6 day shuttle orbit around the moon. Additional deep space exploration launches are in the works to construct habitats at the moon and beyond to Mars.

Lee says Lockheed Martin has an internship program for high school students to learn more about a career in aerospace. One student told her “Mars will be our moon landing.”

“The synergy for schools and private/public entities is the best in the country,” said Congressman Perlmutter, on the aerospace industry. He mentioned that the School of Mines has a new department on space resources that is working on the future of property law for moon resource extraction.

In the $5-billion-a-year Colorado ski industry, John Marriot said immigration policies have started to play a major role. More than 50% of the seasonal workers in ski towns are not from the United States and of late, many are experiencing difficulty getting temporary permits. These tourism industries rely on quick, timely approvals at the federal level for their workforce.

“We train kids from all over the world, then send them back,” said Perlmutter. “We need skilled workers. From a business perspective, we’re shooting ourselves in the foot.”